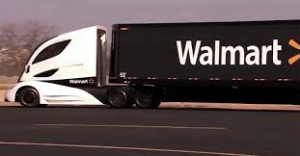 Walmart continues to make waves with their new concept rig show on the left. A futuristically styled tractor powered by a microturbine-electric hybrid drive system and a trailer made of lightweight carbon fiber comprise a concept rig shown off by Walmart Stores at a sustainability conference early this week. It’s sleek, modern and it has that 21st century look, but can this big rig really influence the energy demand for Walmart?

The rig demonstrates materials and electro-mechanical systems that could help the giant retailer get further to its goal of reducing by half its energy use by 2015, executives said. They set that goal in 2005 and are now 80% there through greater efficiencies in transport procedures and energy efficiencies in its stores and other facilities, they had previously reported. Imagine if you will, a big rig that is lighter, all new technology and drives twice as far. You have to give Walmart credit, this is how their growing in the new decade and this is why there’s a Walmart everywhere, “Innovation.”

The new Walmart concept rig has several great features. Peterbilt Motors, Capstone Turbine and Great Dane Trailer are among those who assembled the concept rig for Walmart.

The cabin tilts, cab-over-engine style, to reveal the turbine, generator, battery pack and electric motor that powers the  tandem-rear axles. A sliding door allows access to the interior. The driver sits in the center of the streamlined cabin with electronic-readout instrument panels on either side of the steering wheel, which sports a red Peterbilt oval, and sleeping accommodations are at the rear.

The trailer is a standard 53 feet long, but its walls have continuous panels of carbon fiber. This makes the truck lighter but stronger. The nose is “convex” – rounded like trailers of the early and mid 1900s. This makes smooth air flow over the front of the rig. This holds the rig to the road, making up for the lighter weight. The front end will save gas. This design also allows more space for cargo the video stated.

Aerodynamic side skirts and wheel covers give the Walmart concept rig a one-of-a-kind look. Truck drivers will love the cab and the electric dashboard that is custom, drivers can use this technology for a variety of different things. The cab seat is staged in the middle of the cab rather then on the side. All the gages and technology is the cab is amazing, a concept rig that has so much potential.

The company calls the rig the Wal-Mart Advanced Vehicle Experience, or WAVE. The company didn’t go into great detail though. We know some things from the video and we can only imagine that the weight is lighter, but we’re not able to confirm it. Executives don’t say how much more aerodynamic or lightweight the vehicle is. They failed to mention if the concept would even be used, but with the given information, I expect Walmart to roll these bad boys out in the near future. They want to get to that 2015 mark on energy and their only 20 percent short.

Flatbed Trucking – Not as Much Work as You Think