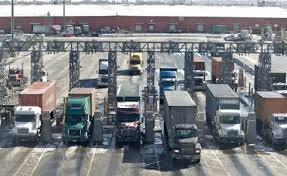 The NELP report says wages are this low because 49,000 of the 75,000 port drivers across the country are classified as independent contractors, not employees. Labor experts say that this allows bosses to get away with not paying minimum wage, benefits or employment taxes. It also means that they don’t have to comply with discrimination laws. It isn’t fair at all, port drivers are averaging $9.30 an hour. Thanks to this report, I hope something can be done to change this.

I feel sorry for not only port truck drivers but for anyone that makes 7-9 dollars an hour. It’s nearly impossible to live off this wage and they wonder why so many people end up in crime and on drugs. It’s ridiculous. Federal workers will get a new minimum wage amount of $10.10 an hour beginning next year I believe. That’s only 250,000 working Americans. What about everyone else? There’s really no point because if they do raise minimum wage, everything will cost more for the rest of us. Sometimes you win, most of us lose.