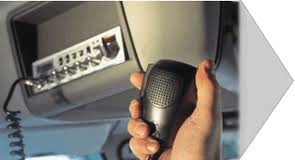 So, you’re a brand new truck driver and you’re excited over having your very own truck assigned to you by your company and now you want to begin making it your very own. Your first step will most likely be to purchase a CB radio for your rig. When you buy a CB, especially your first one, you don’t need to spend five hundred bucks on it. A Cobra 29 will get the job done and save you a bundle of cash too. You can grab one of these radios for about a hundred bucks at most CB shops (used of course) and usually they will already be peaked and tuned for optimum performance. You can have them really cranked up  for about a hundred bucks more, and they will easily hold their own on the road.

Now that you have your new radio, you need to learn how to communicate with other drivers. A truck driver has his own language within the English language that must be learned if you want to really know what’s going on around you. Here are a few words and phrases you will most likely hear on your CB.

“Breaker 1-9”
This phrase is perhaps the most used trucker quote in all of Hollywood. It is pronounced “breaker one nine” and equates to asking permission to speak on channel 19. Channel 19 is the “trucker channel” on the CB radio, and before you begin speaking on the the channel, it’s customary to ask for other drivers who may be carrying on a conversation for a break.

“Bear”
This is truck driver lingo for police officers. This word will often be accompanied by adjectives such as “full-grown,” “undercover,” and “female.” These mean DOT officer, unmarked police car, and female officer, respectively.

“Gator”
While this could refer to alligators in some parts of the country, it usually refers to the tread belt of a re-capped tire that has blown and is laying in the road. A truck driver wants to avoid running these over at all costs, as the steel belts in the rubber can cause serious damage to tires and brake lines.

“Lot Lizard”
This is the nickname given to prostitutes who hang out in the truck stops. They often walk the parking lots at night searching for their next customer and when the cops roll through, they slither back into the shadows. Incidentally, many states now have laws that require a driver to inform his company when he is arrested for soliciting sex from a prostitute and some states also call the driver’s next of kin (wife etc.) and inform them as well. So, before you let one of these ladies into your rig, make sure you’re OK with the possible consequences.

“Evel Knievel”
Truck drivers all over North America pay homage to the motorcycle king by referring to motorcycle cops by his name.

Well, these are just a few of the terms used by drivers in the US and while there’s many more I could add to the list, you will learn them yourself over time. Remember that while a CB radio can be fun and entertaining, it can also be a great source of information to the truck driver. Be sure to pass on information you may have to other drivers so they are aware of possible hazards. Also, be sure to be respectful and polite on the radio. While the days of receiving a ticket for swearing on the CB may be over, that does not lessen the responsibility of each truck driver to be considerate of others when he speaks.  Use your radio wisely, enjoy your conversations with other drivers, and most importantly, be safe on the road.

Home Away From Home: 3 Items Every New Truck Driver Should...