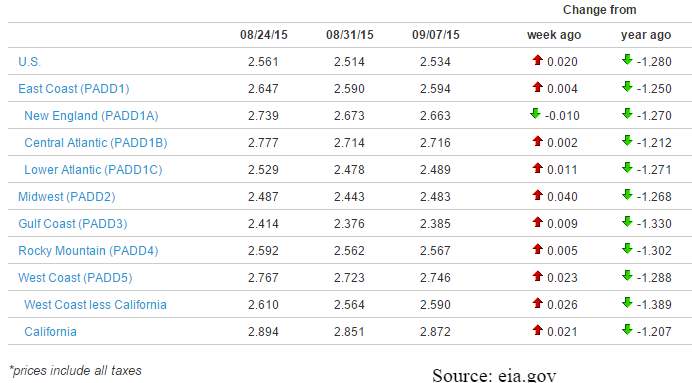 Diesel prices all over the United States were slightly up this week with the only exception being in the New England region. The N.E. region saw a decline of 0.010, dropping the average to $2.663 per gallon.

The Gulf Coast continues to be the cheapest area to find diesel. The Gulf Coast region has the nation’s lowest diesel average at $2.385 per gallon. 12 months removed, that average is $1.330 a gallon cheaper. Despite seeing the biggest gains at 0.040, the Midwest region still has the second least expensive diesel at $2.483 per gallon. Rounding out the top 3 is Lower Atlantic region at $2.487 a gallon.

The California region continues to be the highest priced diesel average in the country. California finished this week at $2.872 per gallon of diesel. The next highest was the West Coast region, averaging $2.746 per gallon.

In the last 12 months, the biggest diesel average drop is the West Coast less California region. In the past year, this region has dropped $1.389.