The ongoing truck driver shortage has been a concern to the trucking industry for many years. Trucking executives have been planning and building strategies to change the trend but the numbers continue to climb. While you wouldn’t think an industry that brought in $700 billion in revenue would have such alarming metrics, the driver shortage is a major concern and one that is now affecting all industry sectors.

As for new truck drivers entering the industry, only 2.2 percent are aged from 21-24. While this is only a little less than the 2.6 percent in 2004, the industry has been trying to bring in more new truck drivers in this age class. But with all the options for college and due to the fact that you must be 21 to drive a truck, these are two big factors that keep young aged men and women from entering the trucking industry.

Carriers from around the country are doing their part, offering some of the highest paid jobs and bonuses we’ve ever seen before. Even so, may feel that higher incomes alone will not be enough to change the heavily favored scales. The industry is learning to adapt to the shortage, but in the near future, the trucking industry will be pushed.

In 2014, the trucking industry reeled in $700.4 billion in revenue. It could have been much higher if not for the driver shortage. We’re seeing intermodal traffic increase, more are shipping their freight by rail. intermodal traffic increased nearly 5% year-over-year in 2014 compared to 2013 and expanded 2% in the first quarter this year despite disruptions caused by severe winter weather across much of the U.S.

Most of the intermodal traffic growth is due to the driver shortage in over-the-road trucking, also known as OTR. Heavy duty trucking is another industry segment that is struggling with the driver shortage. All segments of the industry are struggling not only to bring in new truck drivers, but to also keep them. The turnover rate for the trucking industry is extremely high, at 97 percent in the last quarter.

Bi-modal carriers are the big winners with their relationships and business with the railroad. Companies such as J.B. Hunt and Swift Transportation are shipping freight by rail to avoid using truck drivers, which frees their drivers up for other loads. Drivers can then focus on routes that lack intermodal rails.

If we continue on the current trend we’re on, we can expect more than 240,000 open truck driving jobs by 2020. Currently, the trucking industry has around 30,000 open jobs. Regulations don’t help the cause either and by 2020, we can expect a lot more rules. The trucking industry is working hard to solve this dilemma and it has become a main stream story. The truth of the matter, if we reach this level in 2020, the U.S. economy could see a big impact due to all the extra loads. 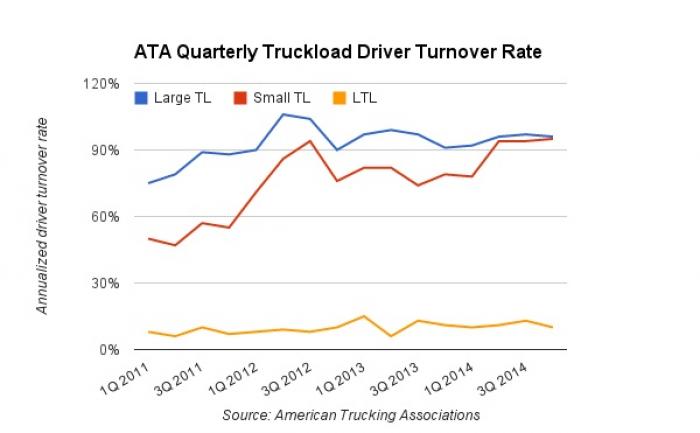 Think about it, if food is delayed from getting to the store, what will you do? You need food, you’ll just go somewhere to find it. We could see mass late deliveries that could affect millions of people, so the truck driver shortage is a very important measure. As an industry, we must continue to make changes before it’s to late.

Time To Invest In PACCAR And Heavy Duty Trucking?