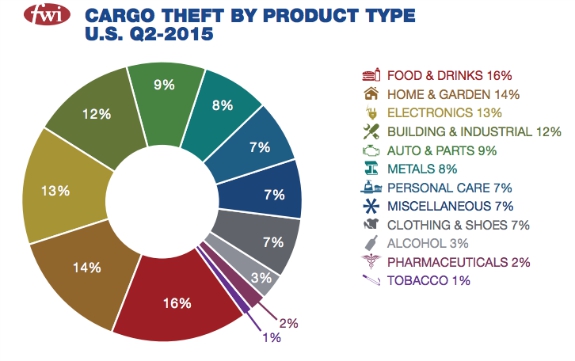 The trucking industry received great news yesterday at FreightWatch International released their quarterly report on cargo thefts. According to the report, cargo theft incidents in the second quarter dropped 27 percent while the number of thefts fell by 11 percent when compared to the first quarter. In total, $189,307 worth of goods were stolen during the 2nd quarter.

Year over year, the industry has seen a 7 percent decrease in total thefts over the second quarter. In total, 178 thefts occurred from April to May. April (60) May (66) June (52). “This was a positive sign and I hope we can continue to improve on the numbers,” Truckers Logic CEO Spencer Jensen stated. “A 27 percent drop quarter to quarter is big, hopefully we’re moving in the right direction with properly secured cargo.”

As usual, food and drinks were the most stolen product type in the second quarter, topping out at 16 percent of total thefts during the period. This is a common product type that is targeted as thieves often target produce and canned/dry goods.

Home/Garden and Electronics ranked in as the 2nd and 3rd most stolen product type according to the report. Both accounted for 14 percent of total thefts during the second quarter. Electronics thefts commonly include televisions and cellphones. As for home/garden, appliances top the list.

Building and Industrial topped the list in 4th place, taking 12 percent of the vote. Surprisingly, the most stolen item in the class are shingles. Taking 9 percent of the chart was Auto Parts (9%), followed by Metals (8%) and Personal Care (7%).

The most prevalent location for large-scale cargo thefts was unsecured parking, representing 90 percent of reported thefts. Thefts involving theft of full truckload was most common during the quarter with a total of 83 percent.

While Personal Care products topped the list as the 7th most stolen product type in the industry, it is responsible for the highest average theft value in the quarter at a total of $493,017. Clothing/Shoes ranked 2nd on the list at $433,836 while the 3rd highest theft value belonged to Electronics at $360,314.