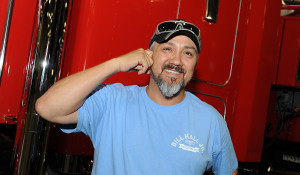 Frances Hall was charged with murder after her husband died in the crash of his motorcycle on Loop 1604 in San Antonio, near his Bill Hall Jr. trucking offices. Police said the 51-year-old chased her 50-year-old husband in a sport utility vehicle and ran him off the road after learning that he was seeing another woman. She’s also accused of ramming the girlfriend’s SUV.

The deadly accident took place on October 10th, 2013. Bill Hall Jr. and Frances was in the middle of making their divorce official. Bonnie Contreras was the girlfriend, the one that Bill was going to leave Frances for. Frances intercepted the two at a local storage unit when all hell broke lose. After ramming Bonnie’s SUV, Frances went after her husband. Frances has been on home arrest since the accident and only allowed outside of the house for court and emergencies.