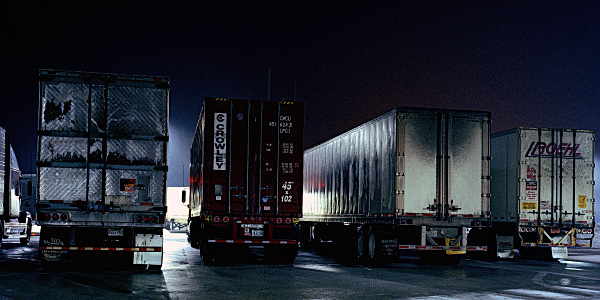 Today, many of us celebrate Memorial Day with our family and loved ones. Many people our home today  Cargo thefts are very common, not only during the weekend but on Memorial Day as well. CargoNet does a great job monitoring and tracking cargo thefts in the freight industry. 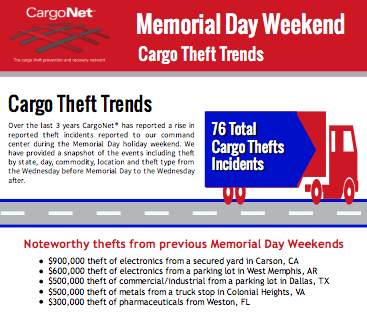 Thousands of truck drivers will be working through the weekend and today. You have to keep an eye on your cargo and freight always. We’re not talking about your everyday average Joe cargo thieves. One score a year would be enough to satisfy these freight thieves and you don’t want it to come at your expense.

Cargo thefts have been off the charts here in 2015 during the first quarter of the year. According to the reports reviewed by CargoNet, cargo thieves have took more than $23 million worth of freight in the quarter, a $14 million increase from the first three months of last year. The average loss value increased by $83,329 per theft, CargoNet said Friday.

Cargo thieves were busiest in California, where 30 theft losses were reported in the quarter, followed by Texas, with 27 incidents. Next came Georgia and New Jersey, with 24 cases apiece, and Florida, which had 20. The most common cargo-crime location were warehouses and distribution centers, which accounted for 23 percent of all losses.

Which Truck Drivers Do Thieves Target?

Don’t get it wrong, ALL truck drivers can be targeted. But some freight is targeted more, some drivers are more likely to be a victim than others. Let’s look at what cargo thieves are looking for.

These are just a few of the freight types that thieves target. Cargo theft is a business to thieves and many of them treat is as that.

Protect Yourself From Cargo Theft

There’s a lot of different things that you can do to protect yourself from cargo theft. First, keep a constant eye on your cargo. Make sure you’re watching your truck at all times. If you stop, don’t journey far from your truck. Do a quick walk around to make sure your truck is secured.

Pay attention to your surroundings. Cargo thieves like to watch the load, learn your behavior. Some will even follow you for many miles. If you pay attention, you can spot suspicious vehicles. If you see something suspicious, call the authorities.

Don’t give thieves opportunity. Cargo thieves, like all thieves, need opportunity to capitalize. Don’t give them the chance to get your load. Watch where you park. Certain truck stops and parking lots are hot beds for thieves, stay away from them.

Warehouses and distribution centers, be on high alert. This is where thieves are striking. Makes sense, what do you do with your downtime? Pay attention this weekend.

Cargo Thefts Are On The Rise

We often discuss cargo thefts during the Memorial Day weekend and rightfully so. However, cargo thefts are on the rise and 2015 could be a record year. We’re on pace for a record year, we’ll have to see how the second quarter goes.

The largest number of losses, 33 percent, involved food and beverages, which can be easily and quickly resold. The highest value losses, however, were electronics, totaling $8.19 million in the first quarter. Electronics accounted for 13 percent of total thefts.

“Truck drivers need to protect their cargo at all times,” veteran driver Mike McCoy stated. “Invest in technology if you have too. If you need more protection, get it. Drivers have lost their lives over cargo theft, you have to be prepared.”