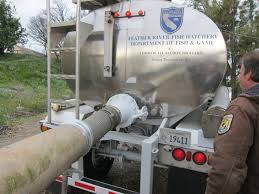 The California drought has been severe this year and if not for trucking services, 30 million salmon would have never made it to the Pacific Ocean. The Sacramento River is so low from the drought, the spawning salmon would have never made it. Instead, the California Fish & Wildlife Service used tanker trucks carrying 2,800 gallon tanks to release the salmon. The salmon usually take a 275 mile journey from the creeks of California to the Sacramento Delta, then off to the Pacific Ocean.

Since the salmon are transported by trucks, their survival rate should be much higher then normally. The salmon are expected to return but experts know that the fish will not know their way. Even so, it had to be done. When you have numbers that reach 30 million, the operation was necessary. Governor Jerry Brown announced a state of emergency in January, asking residents to use 20 percent less water. The California drought is said to be the worst drought in more then 100 years.

The tanker trucks can hold around 130,000 salmon in all. In total, we’re looking around 240 total truck loads to move 30 million salmon. The project is expected to take around 10 weeks in total. California has already had issues with salmon since the 2008 closure of the salmon season. The salmon industry has already affected thousands of people and cost the state millions.