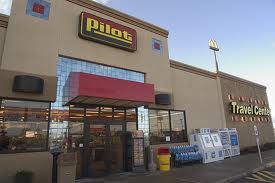 Iconic truck stop company Pilot Flying J has entered an agreement with the U.S. Justice Department to resolve the criminal investigation into the company’s fraudulent rebate scheme, agreeing to pay a $92 million fine and full restitution to companies victimized in the scam.

The $92 million penalty is in addition to the $85 million Pilot Flying J agreed to in November, in which the company signed off to pay 5,500 trucking companies the money it withheld from them in fuel rebates along with 6 percent interest, attorney’s fees and court costs.

Pilot’s scheme came to light in April 2013, after its Knoxville, Tenn., headquarters were hit by the IRS and FBI. A federal affidavit was released days after the raid detailing the accusations against the company, saying it had withheld millions of dollars from trucking company customers in a nearly decade-long period.

Pilot said the settlement also prevents the company from being prosecuted, but the Justice Department says the settlement does not prevent the prosecution of individuals.

“We, as a company, look forward to putting this whole unfortunate episode behind us, continuing our efforts to rectify the damage done, regaining our customers’ trust, and getting on with our business,” said CEO Jimmy Haslam.  “We’ve been committed from the beginning of this to doing the right thing, and that remains our commitment.”