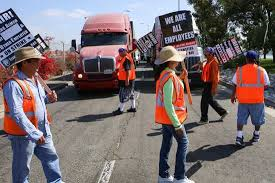 Truck drivers at the ports of Los Angeles and Long Beach agreed Saturday to a cooling-off period following five days of striking that briefly shut the massive ports.

Los Angeles Mayor Eric Garcetti said he requested the cooling-off period, and the truckers agreed Saturday to pull down pickets while the city’s harbor commission investigates their allegations of poor working conditions and unfair labor practices.

“The city will facilitate a dialogue among the parties in the weeks ahead,” he said in a statement.

The port strike began on Monday and later drivers agreed to resume work Monday after three trucking companies agreed to accept all drivers back to work without retaliation and without being forced to sign away all future rights in new truck leases, said Barb Maynard, a spokeswoman for a campaign to organize truckers.

On Monday, 120 drivers began striking against Green Fleet Systems, Total Transportation Services Inc. and Pacific 9 Transportation Inc. They said the companies have prevented them from unionizing and improperly classified them as contractors — rather than full-time employees — to minimize wages and benefits. They say that their paychecks often register below minimum wage once the cost of renting and maintaining a truck is factored in, and they have filed lawsuits and complaints with state and federal labor agencies to change their status.

The companies counter that pay is good and those picketing do not represent the majority of drivers.

Cargo moved normally, but on Tuesday nearly 1,000 dockworkers at four of the ports’ 14 terminals left their posts in solidarity with the truckers. The walkout briefly disrupted the movement of international cargo before an arbitrator ruled the job action was not permissible and ordered dockworkers to resume loading and unloading ships.

The action came as the union representing dockworkers at 29 West Coast ports negotiate a new contract.

The ports are the primary West Coast gateway for hundreds of billions of dollars of annual trade with Asia.

The three trucking companies have about 400 trucks registered at the Port of Los Angeles — about 10 percent of those that operate on a regular day, port spokesman Phillip Sanfield said.