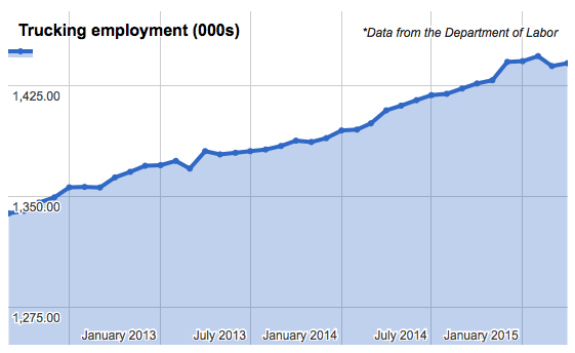 The for-hire trucking industry added 1,900 jobs in April on a seasonally adjusted basis, according to the Department of Labor’s monthly employment report, released May 8, making up some ground lost in March.

The DOL, however, did also downwardly revise March’s already poor employment showing for trucking, now reporting a loss of 7,300 jobs in the month of March.

On the whole, however, trucking employment continues a now years-long upward trend, now back to pre-recession levels and nearing an all-time high. The transportation sector gained 15,200 jobs in April as the national unemployment rate fell to its lowest level in seven years,

The transportation sector with the highest employment increase was “support activities for transportation,” which had 648,200 jobs in April, compared to 643,400 in March.

The biggest drop in employment in the sector was “transit and ground passenger transportation,” which lost 400 jobs last month. The category had 470,900 jobs in April, down from 471,300 in March.