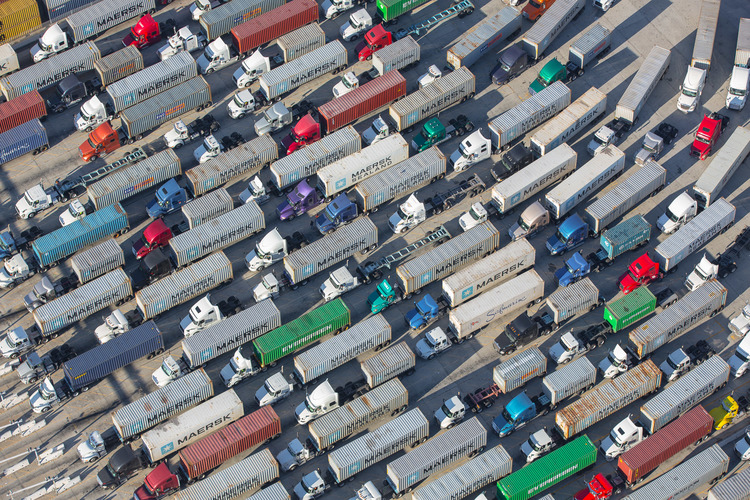 Some trucking companies are suggesting that the end of the owner operator is quickly approaching. Why would anyone suggest such a thing? Thought about that myself, I don’t see “me” or many other owner operators going anywhere. But we do give them a fair shake, we always do here at Truckers Logic.

For anyone that has drove a truck through the California ports, especially in Southern California, you know how tough the haul is. Southern California is home to some of the busiest ports in the world. I thought with time, we’d find more solutions to eliminate some of the congestion, but we’re not. We don’t have the solution. However, some trucking companies believe they have a solution in the drayage trucking market.

Trucking firms are buying trucks and employing drivers full time to haul goods the short distance between ports and nearby rail yards and warehouses. This has been a key link in the national supply chain. This type of trucking is known as drayage trucking.

According to the Wall Street Journal, private equity firm Saybrook Capital LLC is funding some efforts as these firms are converting from independent contractor models. As many of you already know, this is where you own your own truck or lease your own truck.

Both the truck driver shortage and congestion are being blamed for all the issues at ports. It’s a prime opportunity for drayage trucking to take market share.

Saybrook Capital launched Eco Flow Transportation LLC this year with 80 drivers and more than 50 leased trucks. The company aims to make a profit by running its trucks day and night with different drivers at the wheel.

The new companies have the Teamsters’ backing. In addition to Eco Flow, the union pointed to Toll Group, Sea-Logix LLC, Shippers Transport Express and Green Fleet Systems as companies that employ their drivers.

While these companies feel that this is the beginning of the end for the owner operator, we see no such thing now or later. Owner operators are still going to be able to under bid contracts. And remember, we’re talking about Southern California here. We could also include a few more busy ports but their market share is still minimal.

Demand is high, we need some 40,000 truck drivers, there’s a lot that plays a role here, a lot of working pieces. Personally, I think we have to look at the roads. Some of these ports in Southern California are terrible. I often ask myself, “what were they thinking when they built these roads like this?”

None the less, Saybrook Capital and others believe their model is the best route to take. Only time will tell if we see a shift to employed drivers over owner operators.