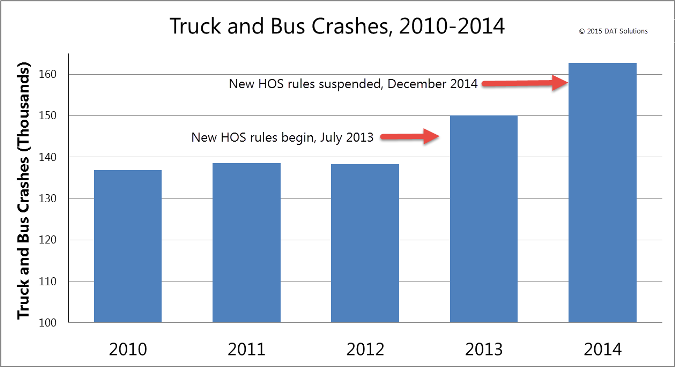 The hours-of-service rules that went into place in 2013 hurt trucking companies economically. The HOS rules reduced fleet productivity by 3% to 5%, and drivers lost between $1.6 billion to $3.9 billion in wages as a result of the legislation. Rates rose as capacity tightened, but not enough to offset the operational losses. A recent study by the American Transportation Research Institute now suggests that the rules might have also had a negative impact on safety.

Truck crashes have increased since July 1, 2013, according to the ATRI. That’s when the more restrictive 34-hour restart rule was put into place.

Motor carrier accidents increased in 2013 and 2014, when the new HOS rules were in place. Data from FMCSA.

The intent behind the restart rule was to shift drivers away from nighttime driving, with the idea being that driving during the day would lead to less driver fatigue and safer roads. That didn’t work out as expected, and increase in crashes was a result of trucks being forced to operate more during peak traffic times. Many of those accidents are actually caused by passenger vehicles, but those crashes negatively affect CSA scores regardless of fault.

The study also found that, as a result of the 1am-5am provision, many drivers avoided using the restart altogether.

“The move by drivers away from use of the 34-hour restart to the rolling recap essentially negates any safety benefit that FMCSA purported the industry would experience with use of the restart provisions,” according to the report. It also added that larger fleets might have had a higher crash risk than smaller fleets, since smaller fleets and owner-operators were more likely to shift to a rolling recap.

Is the Rollback Permanent?

The FMCSA is currently conducting a study into whether or not the stricter restart rules enhanced safety. The House Appropriations Committee recently passed a transportation and housing bill that included a provision to keep the rules suspended. If passed by Congress, the 2013 restart rules would only be reinstated if the report demonstrated that “drivers who operated under the restart provisions… demonstrated statistically significant improvement in all outcomes related to safety, operator fatigue, driver health and longevity and work schedules” vs. drivers who had run under the rules in place before the 2013 change.”

Meanwhile, capacity has loosened since the rules were suspended in December, and rates are beginning to resume the seasonal trends we’re used to seeing.

Truckers Logic partners with DAT to offer a special on the TruckersEdge load board to its members. Sign up for TruckersEdge today and get your first 30 days free by signing up at www.truckersedge.net/promo729 or entering “promo729” during sign up.

* This offer is available to new TruckersEdge subscribers only

About TruckersEdge®, powered by DAT®

TruckersEdge® Load Board is part of the trusted DAT® Load Board Network. DAT offers more than 68 million live loads and trucks per year. Tens of thousands of loads per day are found first or exclusively on the DAT Network through TruckersEdge.

Note: This article was adapted from DAT’s blog post on www.DAT.com. It was first published in March 2015

Electronic Logging Devices Expected To Be Published In April