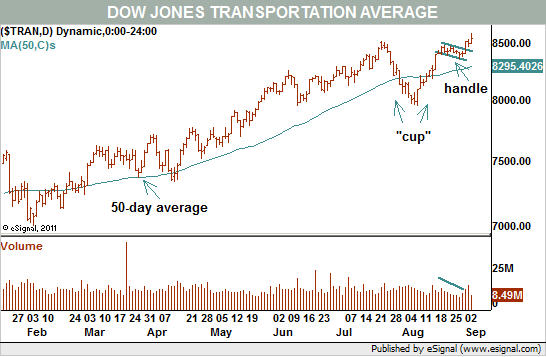 The Dow Jones Transportation Sector continues to outperform the market and has done so for the past 12 months. Since the transportation market dipped in early February, it has continued to beat the Standard & Poor’s 500 by a margin of 21 to 15 percent. Indicators show volume continues to increase and demand for transportation shares are high, still true today.

When you look through market charts, many stocks saw a strong July and rebound in August. The Dow Transports had a similar cup-and-handle, as seen on the chart above. However, this is not your typical cup and handle. Transportation sectors show a steep “V” as you can clearly see. What does this mean?

The pause we seen with transportation stocks isn’t inline with your traditional cup-and-handle. The experts and analyst believe this is a strong indicator. Michael Kahn had this to say. “Prices paused at resistance as volume contracted sharply, and then came the rally Tuesday with a sharp expansion of volume. That was a breakout. Thursday’s trading provided a nice upside continuation and moved the sector above prior resistance. The form may not have been perfect, but the spirit of the pattern was present. And it bodes well for the coming weeks.”

Michael suggest that there is opportunity in transport as a sector. The other groups within transportation—marine transport, trucking and airlines—also look strong, but they do not have the appealing technical patterns of rails and delivery. Airlines in particular attempted to break out earlier this week as oil prices tumbled. When oil recovered, however, the breakout evaporated. That does not mean the group has reversed to the downside, but waiting for a better breakout signal is indeed warranted.

Transports as a sector look strong and continue to lead the market. It is a good place to mine for individual opportunities, even as the market wades its way through September, the month that often gives investors the most trouble.