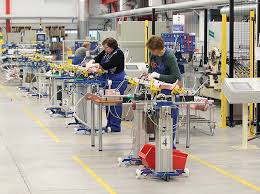 The Institute for Supply Management’s factory index was 55.3 after a five-month high of 55.4 in May, the Tempe, Arizona-based group’s report showed today. Readings above 50 indicate expansion. The median forecast of economists surveyed by Bloomberg News called for 55.9. A measure of orders was the strongest this year, all indicators pointing to growth.

Growing demand for automobiles and construction materials has kept assembly lines busy, while companies become confident about expanding. Both are great signs for manufacturing, growth and more jobs. Along with sustained consumer spending, lean inventories and improving overseas markets are helping fill order books at the nation’s manufacturers.

Estimates from 88 economists in the Bloomberg News survey ranged from 54 to 57. Manufacturing accounts for about 12% of the economy. This is certainly a good sign for the economy despite U.S. markets being up and down.

Global manufacturing was uneven last month, figures today showed. In China, the world’s second-largest economy, factories grew in June at the fastest pace of the year, according to a gauge from the National Bureau of Statistics and China Federation of Logistics and Purchasing.