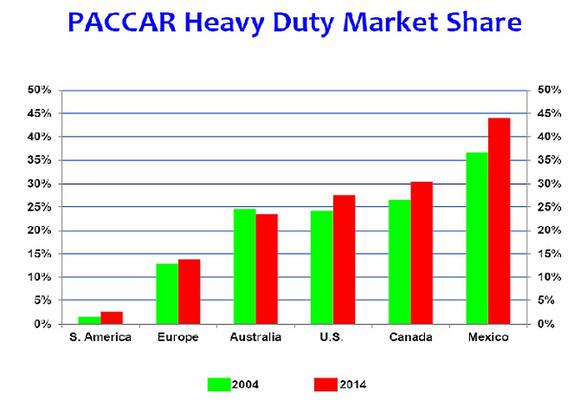 PACCAR is one of the largest manufacturers of trucks in the world, as well as a strong Fortune 500 company. And with competitor names such as Kenworth and Peterbilt that have been a staple of the industry for decades, PACCAR has been able to see continued growth over the past decade, especially in the heavy duty trucking markets.

2014 was a big year for PACCAR with the company growing revenue to $19 billion, a 11 percent increase. Net income surged 16 percent to $1.36 billion, becoming the company’s second best figure to date.

PACCAR shows no signs of slowing down as the company is nearing the launch of its 11-liter engine in North America by early 2016. The company has the opportunity to pull away from the competition as PACCAR continues to focus on manufacturing its own engines. The company’s MX-13 engines had a great fourth quarter. 37 percent of the engines made their way to Kenworth and Peterbilt heavy duty trucks during that span.

The company’s management and leadership has been second to none. And with the opportunity of PACCAR manufacturing its own engines, the company is destined to have a strong 2015 and 2016 campaign. In fact, this may be a stock that you want to lock down for a long-term investment. There’s no question that the company is making the right moves, especially in the heavy duty trucking department.

PACCAR INC has improved earnings per share by 37.7% in the most recent quarter compared to the same quarter a year ago. The company has demonstrated a pattern of positive earnings per share growth over the past two years. We feel that this trend should continue. During the past fiscal year, PACCAR INC increased its bottom line by earning $3.82 versus $3.30 in the prior year. This year, the market expects an improvement in earnings ($4.53 versus $3.82).