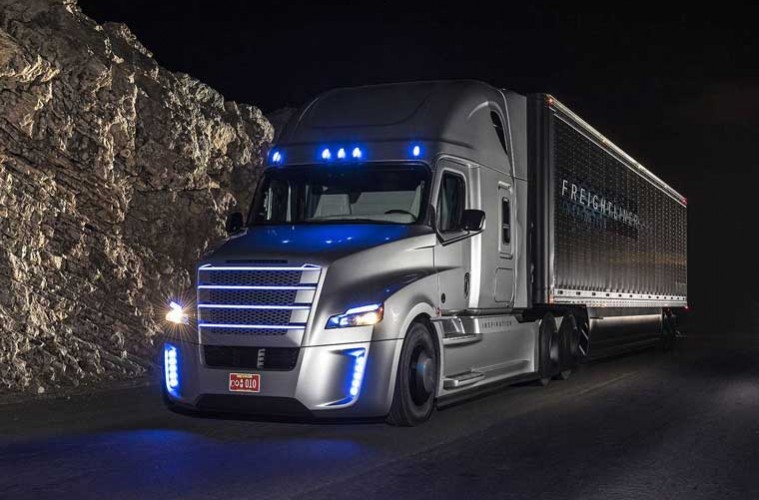 Traveling about 55 miles per hour on a Nevada highway, the big rig’s driver looked like The Thinker, with his elbow on the arm rest and his hand on his chin. No hands on the steering wheel, no feet on the pedals.

Mark Alvick was in “highway pilot” mode, the wheel moving this way and that as if a ghost were at the helm.

Daimler Trucks North America LLC says its “Inspiration” truck, the first self-driving semi-truck to be licensed to roll on public roads — in this case any highway or interstate in Nevada — is the future of trucking. It’s a future that will still need drivers, but they might be called “logistics managers.”

Although much attention has been paid to autonomous vehicles being developed by Google and traditional car companies, Daimler believes that automated tractor-trailers will be rolling along highways before self-driving cars are cruising around the suburbs.

On freeways there are no intersections, no red lights, no pedestrians, making it a far less complex trip, said Wolfgang Bernhard, a management board member of Germany’s Daimler AG, at an event in Las Vegas.

But it will be years before an autonomous truck hits the highway for anything more than tests and demonstrations, the company says. The industry is watching the developments, said Ted Scott, director of engineering for American Trucking Associations, which represents trucking companies.

He questioned what the economic benefit would be, with companies paying a driver’s salary on top of the new technology, even given the potential safety advantages including less-fatigued drivers.

“Being a tired driver is not as big of a problem as it’s often made out to be,” Scott said.

“We mainly have questions,” said Norita Taylor, the group’s director of public affairs, citing current laws regulating how long a driver can drive and prohibitions on texting while driving.

Al Pearson, Daimler Trucks’ chief engineer of product validation, said all the same laws still apply: No texting, no napping while in motion.

“We need an attentive driver,” he said, with the technology removing some of the stress.

Legal and philosophical questions stand in the way, as does perfecting the technology that links radar sensors and cameras to computers that can brake and accelerate the truck and handle any freeway situation.

Public perception of a self-driving car will also be a hurdle. Daum said society might forgive a number of deaths caused by tired truck drivers at the wheel but they would never forgive a single fatal crash blamed on a fully automated big rig.

For now four states, including Nevada, and the District of Columbia, certify testing of autonomous vehicles on public roads as long as a human driver is behind the wheel, and a few othe

It will still take some time before the company will be able to handle loads but don’t count them out. In the close future, self driving rigs could be driving the trucking industry.