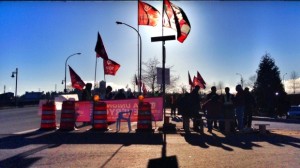 More then 1,250 container truck drivers have been on strike for nearly a month in Port Metro Vancouver. Although the non-union and unionized truck drivers have been a force to reckon with, some port truck drivers have already called it quits and have returned to work. More than 1,000 non-union truckers first walked off the job in February at the port’s container terminals. They were joined by the unionized truckers on March 10. The BC government is firing back with what is going to be known as Back-To-Work-Legislation. The legislation is said to affect about 250 unionized truckers who are members of Unifor, and would likely include a 90-day cooling off period and substantial fines if truckers refuse to comply. We’re already seeing President Robin Sylvester warning drivers that they will risk losing their license if they don’t return soon.

The now three week Port Metro Vancouver strike has had economic impacts in Canada. As of this weekend, the port was only operating around 40 percent. This number was even lower if not for recent truck drivers returning to work. Both imports and exports have been delayed. Many people are blaming the non-union truck drivers for not asking for enough money in the beginning. “They received what they wanted and then they realized it wasn’t enough to live on,” one truck driver said.

Although the Port Metro Vancouver strike has been a hard fought battle, many expect that the port truck drivers won’t receive much more money if anything. Just like anywhere else, when you’re not union, you’re not left with much options. We have to give them credit for fighting though, right is right. It’s just like the old saying, “United We Stand, Divided We Fall.”