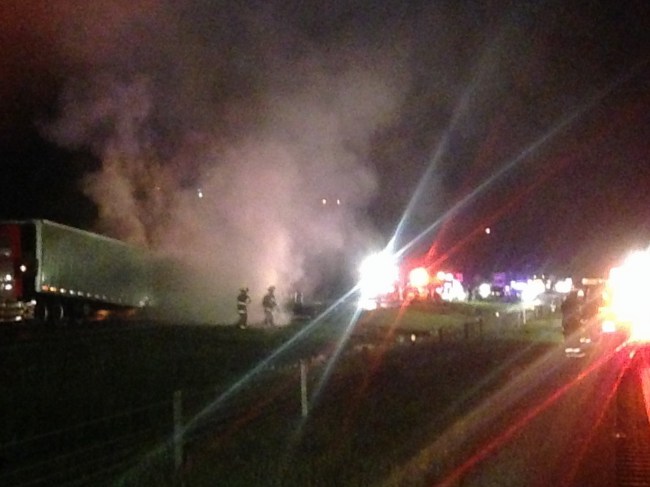 The open road is a dangerous place and when you mix a semi truck with high speeds, you have the making for a disaster. Unfortunately, this was the case in Hammond, Indiana on I-65 last week. Five people were killed in a crash on I-65 in Tippecanoe County. Police said the truck driver who created the pile-up was driving too fast. Several sources has uncovered that Indiana trucking company where he worked, has been under federal scrutiny for some time now.

The deadly I-65 crash happened just before midnight on Thursday night. Five people, including a mother and her two children, died as a result of the impact and tragic accident. One man described the incident as a “scene from a horror movie.”

Indiana State Police said they were rammed by the semi 34-year-old Ruslan Pankiv drove. The Lake Zurich, Illinois man died in the crash as well, and was a contracted worker of Illini State Trucking Company.

According to the Federal Motor Carrier Safety Administration, the company has been targeted for increased random roadside inspections because of the number of times its drivers were accused of driving more hours than legally allowed. According to federal records, the company has 53 violations including speeding and following too close.

Illini State Trucking Company did release this official statement. “We are currently conducting an investigation. We want to extend our sympathies and condolences to the families of those killed.”

Our nation’s highways are dangerous and you never know when “it” will hit the fan. As truck drivers, we have a responsibility to abide by the law. It doesn’t take much to cause accidents like this and you see what the outcome can be. Please use careful judgement and always keep safety at the forefront.

To all of those involved, the staff at Truckers Logic would like to ask our community to keep all of those involved in your prayers. Such a terrible accident. One life is one life too many. Be careful out there and remember to always revert back to your safety training. It can happen to us all.