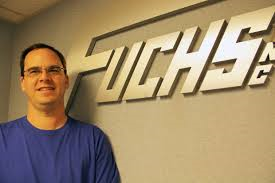 Fuchs Trucking, which has been located just outside Sauk City for 44 years, was sold Oct. 20 after a 60-year run as a family-owned business.

The family of the late LeRoy and Dorothy Fuchs struck a deal with Jay Doescher of Waunakee, his second cousin Eric Padrutt of Cross Plains and the Hartung Brothers, owners of H and N Logistics, have partnered to operate the company as Fuchs Transport Holdings, LLC.

“It was very emotional for us,” Kohlbeck said. “The word everybody uses is bittersweet. But we knew we were leaving it in good hands.”

She said the family was confident the business would continue to be successful.

“When we met Jay and Eric they were down to earth people,” she said. “They had the same kind of core values and standards as we have. We knew they would care about the employees, the customers and the community, so it was a win-win situation.”

Kohlbeck, along with her husband Jim, brother Scott and his wife Linda, sister Shirley Jonas and her husband Brad, and sister Sharon Meyer will remain as employees of the company.

Sandy Fuchs and her husband Steve Koehler are retiring.

Doescher, a 1987 graduate of Wisconsin Heights, has his own roots in transportation and has worked in manufacturing. His dad Roger has been an over-the-road driver since Doescher was 12 years old. His wife Beth’s dad also was a truck driver.

Starting off as an auto mechanic, Doescher received an accounting degree from the University of Wisconsin-Madison, and worked for Virchow Krause.

A few years later he worked for Soft Switching Technologies based in Middleton for 14 years managing operations until it grew to $35 million in revenue and was sold to Rockwell Automation.

“This is kind of in our blood and in our background,” Doescher said. “This was just an awesome fit and a great company. I grew up six miles away from here. Running from Black Earth to Sauk, I’ve seen this company here many times.”

While neither Doescher nor Padrutt had direct experience in transportation and logistics, they partnered with Hartung’s H and N Logistics, which provides trucking services for raw vegetable products, liquid and dry fertilizers, and machinery.

Doescher said one of the most attractive aspects of Fuchs Trucking was its reputation both with its customer base and in the community.

“One of the things I liked most about them was how they help the community,” Doescher.

Kohlberg said that all started with her dad, too.

LeRoy and his brother Willard started the company in 1955, about eight years after their dad Charles and brothers Earl and Bill started Prairie Plumbing and Heating.

Fuchs Trucking was located next to August Derleth Park in Sauk City. It moved to the property on Highway 78 in 1970, two years after Willard died of a heart attack at the age of 39 on Mother’s Day while working on a truck.

Prairie Plumbing and Fuchs Trucking aren’t the only entrepreneurial endeavors of the Fuchs family in the Sauk Prairie area.

However, it was LeRoy whose business efforts may have had the most impact.

He had a hand in starting Sentry Foods, once located in Sauk City on Phillips Boulevard at the Bee Zee grocery store, where Family Dollar now stands.

He designed and built the Eagle Inn restaurant, and hired Darlene Burzynski to run it more than 30 years ago after she managed the Penguin restaurant and bar for many years.

“He wanted it for the business men to have their meetings and a breakfast bar for the farmers,” Kohlbeck said. “He was a part owner in the Fire House restaurant. He was an entrepreneur all the way. He wanted to help develop Prairie du Sac.”

He also started the former Home Town Hardware store, a laundry mat and beauty salon in Prairie du Sac on the corner of Galena and Water Street where the First Weber Real Estate offices are now located.

Fuchs Trucking began to grow with Wick Homes as its first major customer. Since then the company expanded to transporting manufacturing materials like glass for Anderson Windows. Walmart also is a client.

Five months before that, he was Grand Marshall in the Cow Chip parade.

“He was in the Mayo Clinic at the time,” Kohlberg said. “At the same time, the Future Farmers of America held an Honor LeRoy Day at the high school. Over 1,000 people came that day. He died in January. The funeral was eight hours of people coming through.”

“We’ll continue what the family built,” Doescher said. “There will be conservative controlled growth. We’ll put some more trucks on and hire more drivers. They clearly could have sold it to a large trucking company. But this way it will stay in the community.”