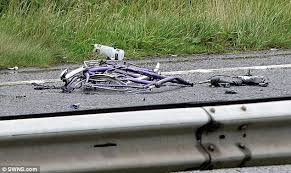 British truck driver Robert Wayne Palmer pleaded guilty to two counts of death by dangerous driving and another count of dangerous driving related to an accident that occurred weeks after the initial fatal crash occured. Palmer is believed to have been asleep at the wheel when he struck and killed cyclists Toby Wallace and Andrew McMenigall in early July of 2013, at about 8:30 a.m. The court case against Palmer revealed a pattern of misconduct that earned the 32-year-old driver a heavy sentence.

Palmer drove for a company called Frys Logistics, delivering goods from a distribution center in western England to Lidl discount stores. A night-time driver, Palmer allegedly spent the day before the accident doing vehicle maintenance work for his company rather than getting rest. Prosecutors said Palmer habitually texted messages from a cell phone while driving — though he was not on the phone at the time of the crash. The prosecution claimed one of Palmer’s texts said, “My work schedule does not include sleep.”

Robert Palmer was sentenced on September 1st in Truro Crown Court in Cornwall. He was sentenced by judge Christopher Harvey Clark QC. Clark stated that Palmer was obviously suffering from extreme fatigue and exhaustion. Clark also pointed out that Palmer ignored the law and rules of the road. Palmer’s total sentence is 8 years and 6 months.

Since the Tracy Morgan accident earlier in the summer, the trucking industry and organizations have been looking for solutions to truck driver fatigue. It’s a shame that it took losing the lives of many across the world but it did finally bring awareness to some of the big issues we face.

Truck Drivers May Be Eligible for Reimbursement for Parking Heaters