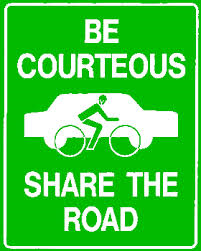 I believe being a courteous driver is a trait everyone should possess, all though I know that is wishful thinking.  It doesn’t really take any more effort on your part in being a courteous driver when you are out on the road.  I have learned through my husband that drives rocky mountain double trailers everyday, that some people are just so oblivious to their surroundings when driving.  If you see a semi that has their blinker on, chances are they didn’t forget to turn it off but are trying to simply move into the other lane.  Now most drivers in a situation like this would either A) not notice the blinker and continue on in their own little world, or B) hurry and speed up and pass them cause being behind a semi is almost the worst thing in the world….almost.  If you were being a courteous driver in this situation you would simply slow down a few MPH and let the truck into your lane or if you were able to move into another lane altogether you would do so.  Would that be hard to do? No, but too many people think they are entitled to having things their way.

One thing I have yet to understand are those people that don’t plan ahead.  By this I mean knowing when they need to get over so they can get off of the right exit.  How many times have you been driving and see that one car that crosses over 3 lanes of traffic to hurry and cut off the car in the exit only lane so they don’t miss the exit?  Two thoughts come to my mind when I see this happen, 1) that’s about as unsafe and dumb as it gets, and 2) they aren’t being a courteous driver. It’s not always things like this that can cause unsafe driving situations for truck drivers and cars on the road.  What about that car that can’t seem to go the same speed for longer than 3 seconds?  You know the one I’m talking about, one minute they are going 65 mph and the next they drop to 60, then they shoot up to 70.  Really, pick a speed already. Big trucks are usually governed at a certain speed. So the truck driver next to you is going the same speed and you are the one that is altering your speed. This isn’t being a courteous driver because you are frustrating the truck driver. If you are going to slow and the truck driver is trying to go around you then don’t speed up. If you pass a semi truck, don’t jump in their lane and slow down. Or even if you have a car that gets in the fast or middle lane only to slow way down and hold up traffic.  That’s not being a courteous driver at all. The slow lane is there for a reason, don’t be afraid to use it.

I’m sure we’ve all taken a vacation or a road trip at some point in our lives.  During that long drive you probably came to a situation where a semi was trying to pass another semi, and they were going so slow.  It seems like it would take forever for them to pass the other truck.  How to handle this situation is something I learned from my husband.  Slow down let the semi over, so he can pass the other truck.  It will only cost you a few seconds of your time for being a courteous driver.  Then you can hammer down and be on your way. It takes a lot longer for a semi hauling 80,000 pounds to pass another semi with just as much weight.  If a semi can go faster than the truck in front of them, they are going to take that opportunity to get ahead.  If not slowing down and getting stuck behind them can make them loose any extra time they may have, and as a truck driver your time is very valuable. And that time is rarely ever made up.

Now when I talk about being a courteous driver that goes not only to other cars and trucks, but also to those traveling by motorcycle, bicycle or even walking.  Don’t be that person that gets in an accident because you weren’t being a courteous driver or weren’t paying attention. Drive safe and arrive alive. We all have our moments, that’s understandable. However, a lot of accidents can simply be avoided. Driving is dangerous, many have lost their lives. Be safe, be courteous and pay attention.

Sickness on the Road – Knowing Your Limits