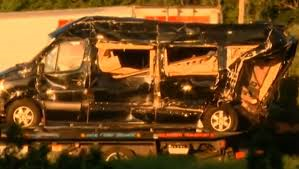 Tracy Morgan remained in critical condition on Monday but Morgan is showing signs of improvement after a car wreck a two days earlier that killed another passenger, the comedian’s publicist said.

“He has been more responsive today, which is an incredibly encouraging sign,” Lewis Kay said.

Morgan’s limo van was hit by a tractor-trailer on the New Jersey Turnpike at about 1 a.m. Saturday, according to Sgt. Gregory Williams of New Jersey State Police.

Morgan suffered several serious injuries from the accident, including broken ribs, a broken nose, a broken leg and a broken femur. He underwent surgery on his leg on Sunday, Kay said, noting any road to recovery would be a long one.

The chain-reaction wreck killed Morgan’s fellow passenger, comedian James McNair, who performed under the name Jimmy Mack, and injured several others, according to officials.

Truck driver Kevin Roper, 35, was arrested and charged after the wreck. Roper posted a $50,000 bail Saturday night, according to James O’Neill, spokesman for the Middlesex, New Jersey, district attorney’s office. According to new reports, sources are now saying that Roper hadn’t been to bed in over 24 hours, perhaps another element playing in favor of the tragic wreck.

Roper was a truck driver for Walmart. A Walmart spokeswoman did release a report, “With regards to news reports that suggest Mr. Roper was working for 24 hours, it is our belief that Mr. Roper was operating within the federal hours of service regulations,” Brooke Buchanan said in a written statement, referring to limits of 11 hours driving in a 14-hour period followed by 10 hours of rest.

Comedians Ardie Fuqua and Harris Stanton were among the injured, as was Jeffrey Millea, Williams said. One person was released Saturday, but Robert Wood Johnson University Hospital in New Jersey wouldn’t disclose that person’s name.