Early Saturday morning 6/7/14 at about 1 a.m. Eastern on the turnpike in Mercer County, New Jersey. A truck driver failed to realize that the traffic ahead of him was going slower and caused a 6-vehicle accident. Normally this would probably just be regional news. However, one of the passengers that was in a limo-bus that was flipped over in the accident was actor/comedian Tracy Morgan. The Truck Driver, Kevin Roper, 35, of Jonesboro, Ga., was charged with one count of death by auto and four counts of assault by auto, according to the Middlesex County prosecutor’s office. Mr. Roper was expected to surrender, the office said. His bail was set at $50,000. 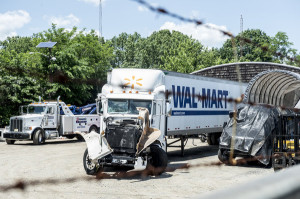 Comedian James McNair who performed under the stage name “Jimmy Mack” was the only one to pass away from the accident. Tracy Morgan is currently in critical condition along with two other comedians that are also in critical condition. A fourth comedian was treated briefly and released. All reports indicated that the family of Tracy Morgan is with him at the hospital. No other injuries have been reported of the four other vehicles besides the tractor-trailer and the limo-bus. There was a Walmart truck involved in the crash (pictured), at this time it is unclear if the Walmart driver is responsible for any of the damage. A Walmart spokesman said that they are actively involved in the investigation and they are ready to step in to assist in anyway possible if need be.

This is definitely a sobering reminder of how valuable life is out there. And also how life can change in a second. Night-time driving can be tough. Especially in those situations where there are so many bright lights around in a place like New Jersey. So remember to always wear your seat belt. And drive like it’s your family next to you. Don’t take chances, because you could be the next one to end up on the news and in prison for killing someone on the freeway. This situation could happen to any of us. I don’t know any driver out there that is bright-eyed and bushy tailed at 1 in the morning. Slow down, don’t drive distracted and treat other motorists how you would like to be treated.

*Information for this story was referenced from CNN and the New York Times.