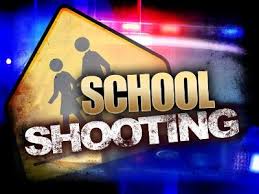 Another school shooting in Roswell, New Mexico, now raises more questions then answers. It happened in a middle school gym, another terrifying scene of outrage and disgust. A 12 year old student walked into the gym with a sawed off 20-gauge pump shotgun and took 3 shots in total. According to police, the 12 year old had a plan. His first shot went straight into the ceiling. A second shot, straight into the floor of the gym. His final shot, it was aimed out the crowded stands where students were waiting to go to class.

This was the scene Tuesday morning at Berrendo Middle School in New Mexico. State Police Chief Pete Kassetas stated that the act was planned. They have evidence that the 12 year old planned this attack, an attack that could have been much worse. Two students were injured during the shooting, one is in stable condition, the other still in critical condition. According to reports on Wednesday, the gun was taken from the parents.

The suspect’s parents, Jim and Jennifer Campbell, and grandparents, Robert and Nancy Bowles, issued a statement Wednesday saying they are “praying that God will be with everyone who has been affected.” It was heartfelt and sincere, but it still happened. Their 12 year old son and grandson planned the shooting and the New Mexico State Police have evidence according to reports on Wednesday.

Berrendo Middle School is expected to be open today as teachers are sure to play the roles of supporters and counselors. I can’t imagine that anyone will comfortable during this “healing process.” Rather then trying to move on, others have to wonder if their school is safe, will they be next. School shootings are beginning to be a regular occurrence anymore. How about 65 total school shootings since 2010? Something has to be done to prevent school shootings. Everything that has been done up to now has failed, it’s time to take a stand.

I’m tired of worrying if my son and daughter’s school is next and I’m sure many others feel the same. As parents, we do play a role. It’s a crime to discipline our children in 2014. We’re not allowed to touch them. That’s nonsense. Some old time discipline is in store and it’s time that we realize it. This starts in the home and it starts by being involved in your child’s life. Once again, the child gets the gun from their parents. It starts in the home and as parents, we have to take a stand.

I don’t know about you, but I couldn’t live with myself if I knew my child has took someone’s life. Yes, I feel for the parents, but it’s not enough. It’s time to own being a parent and it’s time to be involved in their life. Needless to say, something has to be done. If it takes a metal detector at every single school, then so be it. Surely our government feels like our children are worth it, right? What’s the going price on a life these days? Our children shouldn’t have to live in fear. If it takes banning backpacks, let’s do it. I want to see progress and measurements being cleared to avoid another school shooting. Our kids deserve better.

What do you think? How can we make our children safe at school?