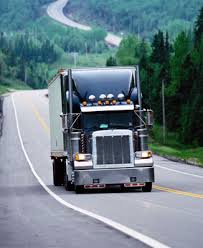 So I returned the next day to the company terminal with my stuff and was ready to start my truck driver training. We loaded up my gear and my trainer informed me that we had a load that picked up in Idaho Falls, Idaho. I had traveled around somewhat before becoming a truck driver. But now it was sinking in. I was going to be away from my family and my state for awhile and if something goes down then I won’t be there for it. However, at the same time I am providing for my family and creating a better life by bringing home more income. We left earlier in the day probably around 10:00 a.m. and he started driving to get us out of the city. Well, instead of letting me drive at any point during the first three and a half hours of the trip. He spent the whole time driving. The roads were dry and the sun was out, so this would have been a great time to have a new driver behind the wheel. So on my first day of truck driver training, I was a passenger.

Once we picked up the load and scaled it, I figured it might be my turn. I was wrong. He spent the next several hours driving while I spent the next several hours of my truck driver training chatting it up with him from the passenger seat. It seemed like we had some stuff in common and he was a nice enough guy. The one thing that bothered me though was when I asked about returning to my home for Christmas. Which is generally regarded as a time that most drivers get home for. He explained to me that it won’t happen and to get used to it. Christmas was in three weeks and we were headed to his home right now to get him a day at home and then start rolling hard. This is what he said to me at least. He also told me that he had just come out of the house before he made the trip to pick me up. I didn’t know any better because I was a rookie. But, wow how did this guy make any money being home all the time?

My first experience behind the wheel was in a pull-out area on Eastbound I-80 in Wyoming. It was early December and around about 4:00 a.m. and it had snowed a little overnight. This is probably not the first place you want your student to start out. I tried to get the truck rolling, but was unable to since this was the first time I had ever driven this truck. The wheels were just spinning on the ice and snow and we slid about 10 inches just off the blacktop. Looking back at it now, if I had driven the truck once for about an hour I probably could have gotten it going. The funny part was that this trainer was over-joyed and thought he was hot shit when he got the thing going. Since then I have spent many years driving in the North-West states and have encountered a lot more than that skiff of snow he was so proud of getting out of. And every time I think about him bragging to his wife about it, I have a good laugh.

He spent all but about two hours of the next two days driving. Then we stopped in Kansas where he was living. He dropped me off at a hotel and said he’d be back tomorrow to begin my truck driver training. I tried calling him several times over the next three days with no answer. On the fourth day I called my company. This got a response out of him and told me to meet him at the terminal on the fifth day. This is where he yelled at me for calling the company and getting him in trouble. I didn’t say a word. Got my stuff and left. Then I found myself back at the hotel that night because an ice storm had moved into the area and closed the roads. So on the sixth day in Kansas I was able to board a Greyhound Bus and head back on a two day journey home. Needless to say, no matter what you go through in your truck driver training. Perseverance is key! Don’t let someone stop you from accomplishing your goals. If I had given up based on that experience alone. Truckers Logic wouldn’t be here today.

So if you are interested in being a truck driver trainer, make sure that you remember what your truck driver training was like. Remember that you were once excited and terrified at the same time. And don’t put your students in positions to fail. If you want to submit your story to us please sign up for our blog, then use the contact us form to let us know you are interested in writing for us. Once we receive your submission we can help you get your story published. Thanks for taking the time to read my story. Be safe out there!

How To Obtain Your Commerical Drivers License

Please Move Over For All Emergency Vehicles – It’s the Law