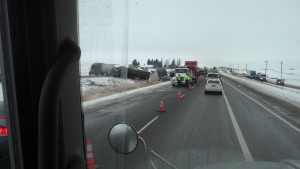 I was having a conversation the other day with one of my truck driving buddies. We were debating the causes of accidents pertaining to truck drivers. I told him that I believed that a lot of the accidents are caused by truck drivers that attempt to stop at places where big trucks shouldn’t go. Whether the driver is stopping at a particular eating establishment that doesn’t have truck parking or they are just simply going down the wrong route. We as drivers have all encountered a time where we drove our rig into a place where it shouldn’t go. Now, I know that every driver has that “emergency” time when they need to find the quickest place to saddle the porcelain throne. But, sometimes in these times of emergency we do not focus on some of the safety factors that have been instilled in us from day one. We aren’t looking for those low bridges, no trucks allowed signs or tight corners. We are simply looking for the closest place to eject and waddle in. In terms of driver accidents we both agreed that this is probably one of the higher probabilities of a truck driver getting into an accident.

My buddy then dropped this idea on me. His theory is that truck drivers get into accidents because they have never been to that location before. He took me as an example, I know every single road between my pickup and delivery point. I drive the same road every day, so I know where all the dips and bumps are. Chances are, when an over the road driver is picking up his load or delivering, he or she has never been to that location before. This puts the truck driver at a greater risk for an accident. The truck driver doesn’t know where the dangerous spots are and how the traffic flows in different spots. And there is always the chance that he or she may get lost, this would provide an even greater probability of the truck driver getting into an accident. So, in my opinion my buddy’s speculation is probably the biggest risk of accident to truck drivers out there. The only truck driver that may not be susceptible to this type of driving accident would be a truck driver with 20+ years of experience. Sadly, these old boys are turning their keys in because of the government’s intrusive oversight on our hours of service.

With the loss of experience for OTR truck drivers due to the tighter controls on the hours of service and couple that with the fact that inexperienced drivers are more at risk for an accident due to the lack of knowledge of their constantly changing surroundings. I would say that the new hours of service is actually creating a more dangerous environment on the road. What can you do to prevent yourself from becoming an accident statistic? Make sure you stick to the fundamentals of driving. Keep it simple stud! Make sure that you are double and triple checking items or conditions that you are unsure of. If you are unfamiliar with a location, take your time! It is better to look like a slow idiot than an idiot with a wrecked truck. And lastly, plan your trip! Don’t just set your GPS and trust it. Use the companies fuel route if they provide one. Bring the map out, double check the route with Google Maps. Use all of your tools available to you rather than just one of them. If you see an old dude with a beard, ask him a question. I learned a long time ago that old people know stuff, especially old people that are around the area where you are. So please take your time, avoid the accidents and be safe out there!

Now that the new update to hours of service is in affect, this accident theory may go under the waist line but I still fill that this is something we should explore more. I know accidents are going to happen but I feel strongly that many of them can be avoided. Truck driver safety should always be considered and if we can make the roads safer for truck drivers and pedestrians, I believe this is a win-win for everyone.

Trucking a Good Solution to the Unemployed