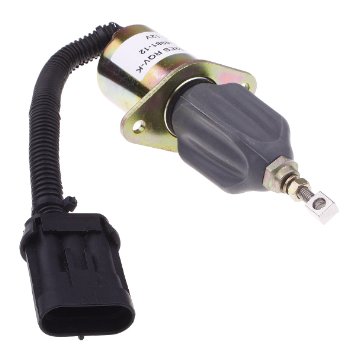 All drivers should learn how to shut down a diesel engine. But, someone might ask, “Why anyone would need to know how to shut down a diesel engine manually?”. Well, there are several reasons for it. The main reason is that your fuel shutoff solenoid might become faulty. It doesn’t happen too often, but still. An owner recently had his ignition switch go bad. He simply couldn’t shut off the engine. As you probably know, a diesel engine unlike a gas engine doesn’t need an electrical spark for ignition. That said, you can’t simply remove the electricity from a diesel to stop it running. You can do this on a gas engine and the engine can’t run without the electricity.

That’s why all modern diesel trucks use some electrical devices in their engines to operate. Almost all diesel engines have an electrically operated device called fuel shutoff solenoid. Most truck diesels have electric lift pumps that actually suck the fuel out of the tank through a filter and always deliver it at a low pressure to the high pressure injection pump. As long as the fuel line does not have any leaks, the engine will continue to run. That’s why disabling the fuel lift pump will not shut down the truck engine. The cut off isn’t there to protect the engine. It’s to protect the driver from fire in a case of an accident.

In other words, when you turn the truck off, the only thing that turns the engine off is the fuel shutoff solenoid. When we take a closer look at it, we can see that the operation of the device is very simple. All it does is get power and pulls up a lever which moves the rack way back to the point that the plungers are no longer able to get the fuel. It’s like having your truck idle, and then pulling the pedal towards until it dies. That’s exactly what the solenoid is doing.

Even more, the solenoid doesn’t energize until the moment you start cranking the diesel engine. Turning the key on will not do anything. You have to crank it in order to send the signal.

It’s important to mention that the fuel shutoff solenoid is located in the fuel pump, but the electronic switch is inside of the driver’s compartments. Many of these switches also have a manual override in the case of a power failure. The solenoid can play a huge role for your track as it’s useful in stopping fuel flow in the event of an accident.

What’s interesting is that solenoids find use outside the automotive industry. Walt Disney discovered that using solenoids in audio-animatronics created the movement required for attractions like the Enchanted Tiki Room. In this event, the solenoid converted electric energy into motion. It’s actually easy to tell a solenoid is going bad because the diesel engine makes no noise when turning the key in the ignition. A bad solenoid doesn’t allow the engine to run.

Larry Buck is the CEO and the Founder of Larry Buck Inc, a auto/truck parts and accessories selling company. He has 5 years of experience in handling truck fuel solenoid. He shares new, exiting and informative discoveries found by surfing the net.