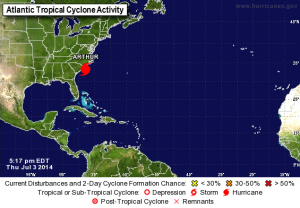 ruck drivers and anyone in the area better take notice that Hurricane Arthur is here. Hurricane Arthur is strengthening over the Atlantic, with forecasters predicting it will become a strong Category 2 as it threatens to deliver North Carolina a glancing blow on Independence Day.

Hatteras island was under a mandatory evacuation order for visitors and residents, with officials asking an estimated 35,000 people to leave through North Carolina Route 12, the only road on and off the island.

Before the storm hit, tourism officials had expected 250,000 people to travel to the Outer Banks for the holiday weekend. Gov. Pat McCrory warned people not to risk their safety by trying to salvage their barbecues and pre-paid beach vacations.

“Don’t put your stupid hat on,” McCrory said Wednesday, urging swimmers and surfers to avoid the water regardless of how good the waves might look. McCrory also declared a state of emergency for 25 coastal and adjoining counties.

“Our major goal is to ensure that no lives are lost during this upcoming storm,” including those of emergency workers, McCrory said.

But the next day, even as the storm gathered strength, McCrory said: “Of course, this holiday weekend, the July 4th weekend, is one of the biggest weekends for coastal tourism in the state, and we anticipate a beautiful weekend after the Tropical Storm Arthur or the Hurricane Arthur is out of North Carolina.”

Some visitors stayed put, hopeful the fast-moving storm would follow predictions to pass through by Friday afternoon. About 20 miles north of the only bridge off Hatteras, Sean Fitzgerald and his 5-year-old son, Cade, enjoyed a sunny morning lounging in beach chairs in the town of Kill Devil Hills.

The sand was dotted with tourists. A handful of surfers took to the water. Like all areas north of Oregon Inlet, Kill Devils Hills wasn’t under an evacuation. Fitzgerald said he saw no need to disrupt his family’s vacation.

“I plan to sit on the beach as long as the sun is here,” then head out for a seafood dinner, said Fitzgerald, 44, of Fairfax, Virginia.

The National Hurricane Center predicted Arthur would swipe the North Carolina coast early Friday with winds of up to 85 mph and then be off the coast of New England later in the day, eventually making landfall in Canada’s maritime provinces as a tropical storm.

Outer Banks residents and out-of-town visitors who fail to evacuate ahead of the hurricane’s expected arrival should prepare for possibly getting stuck for several days without food, water or power, National Hurricane Center forecaster Stacy Steward said Thursday.

“We want the public to take this system very seriously, go ahead and start their preparations because time is beginning to run out,” he said.

The first named storm of the Atlantic season prompted a hurricane warning for much of the North Carolina coast. Tropical storm warnings were in effect for coastal areas in South Carolina and Virginia. On the Outer Banks’ Ocracoke Island, accessible only by ferry, a voluntary evacuation was under way.

Officials, hotel owners and would-be vacationers as far north as New England were also carefully watching forecasts. The storm was enough of a concern that officials in Boston decided to move the annual Boston Pops July 4th concert and fireworks show up by a day because of potential heavy rain Friday night. And rip tides were a threat as far north as New Jersey.

One of the Outer Banks visitors who planned to leave Thursday was Gary Reinhardt, 63, of Sarasota, Florida.

“I’m worried about the road. It took way too long to get here,” he said, a reference to the two-and-a-half hours it took him and his wife, Lori Reinhardt, to get onto the island last Sunday in normal summertime traffic, when no storms were in sight.

Other areas of the Outer Banks were taking a cautious, but still-optimistic approach: No evacuations had been ordered for areas north of Hatteras, including the popular town of Kill Devil Hills, which was the site of the Wright brothers’ first controlled, powered airplane flights in December 1903.

Nancy Janitz, 60, of Jacksonville, North Carolina, said she was ready, thanks to technology.

“I have my NOAA radio, and I keep tabs on Twitter and Facebook for updates,” she said. “I’m as prepared as I can possibly be.”

Forecasters had thought Arthur would reach hurricane status later Thursday, but its increasing strength and a defined eye prompted them to revise the projection late Wednesday, the Miami Herald reported.

The worst of the storm should occur at Cape Hatteras about dawn Friday, with 3 to 5 inches of rain and sustained winds up to 85 mph, said Tony Saavedra, a meteorologist at the National Weather Service. But forecasters said that by later Friday, the effects of Arthur would be past the Outer Banks, with the rest of the weekend salvaged.

In the Myrtle Beach area, the heart of South Carolina’s $18 billion tourism industry, Arthur was expected to move in by Thursday night, spinning wind gusts from 40 to 50 mph toward the high-rise hotels and condominiums lining the oceanfront.

Farther south, in Hilton Head Island on the state’s southern tip, most were confident would pass well out at sea.

“It will be a sold-out weekend,” said Charlie Clark, a spokeswoman for the local Chamber of Commerce. “… We’re not getting calls from visitors asking what’s up with this storm.”

If Arthur makes landfall in the U.S. on Friday, it would be the first hurricane to do so on July Fourth, according to National Hurricane Center research that goes back to the 1850s.