The Truckers Jamboree is hosted every year at the Iowa 80 Truckstop, I-80 Exit 284, Walcott, Iowa. Since it’s inception in 1979, the Truckers Jamboree has been celebrating America’s Truckers. This event is a great place to celebrate and learn about trucking and those big rigs. “It’s our way of saying thank you to the millions of truck drivers that deliver the goods we consume, whether it’s groceries, gas, clothes or cars — you can bet it was delivered by a truck.”

One of my best memories is the famous Iowa Pork Chop Cookout. Wow! Talk about some of the best pork chops you’ve tried in your life. The country music was awesome this year. The fireworks were great. Celebrating America and celebrating millions of truck drivers that call America home. It doesn’t get any better than this.

Iowa 80 Trucking Museum also celebrated the 100th birthday of its 1915 Mack AB during the Walcott Truckers Jamboree. Get the full details and photos at Iowa 80 Truckstop. 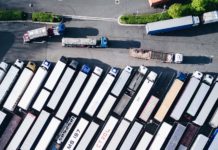