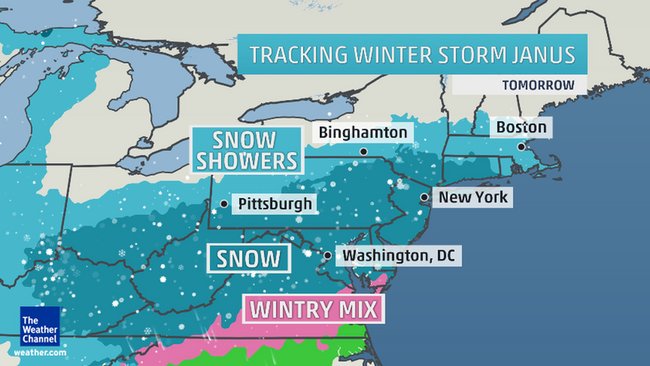 A major snowstorm is forming in the central U.S. is expected to drop a foot or more of snow in the Northeast. An artic clipper as weather buffs would call it is heading southeast and is expected to redevelop and hug the Northeast coast. From Chicago to Detroit, Indy to Pittsburgh the snow is already falling over Illinois, Indiana, Michigan and Ohio. Kentucky, West Virginia, Virginia, Tennessee, North Carolina, Pennsylvania, New York, Maryland and the rest of the Northeast is expected to get snow in the next two days.

Along with a general 1-2 inches of snow, we’re also expecting an artic air mass that will bring low temperatures nearing zero and below. Traffic is sure to be effected so make sure you allow some extra time when traveling, making hauls and shipments. Lows in Minnesota are nearing -20 degrees at this current time and that frigid cold air is expected to reach the far south of the United States.

According to reports, the West Virginia mountains can pick up a foot of snow and the Northeast coast could reach near equal amounts. Moisture from the south is energizing the storm and the cold artic front will ensure that nearly all of the storm will be snow. A wintry mix is expected in Virginia and parts of North Carolina before turning into all snow. The storm is expected to redevelop over Virginia and ride the coast before moving off into the Atlantic Ocean late Wednesday.

If you have a haul coming up in these areas, expect delays and plan ahead. Most of the heavy snow is expected in the West Virginia mountains and eastern Virginia. Large snow totals are also expected in New York, Philadelphia and far north as Boston. Be sure to stay tuned for updates. If you need to check on road conditions, just be sure to follow our link. Be careful, plan ahead and be safe.

Electric Trucks: The Trucks of the Future?