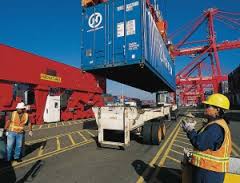 Drivers in a long-running labor dispute with three trucking companies at the ports of Los Angeles and Long Beach began what they said would be an indefinite strike Monday.

The impact on the movement of cargo around the sprawling port complex, the main gateway for hundreds of billions of dollars of trade with Asia, was limited. But the threat of a broader disruption loomed if striking truckers take their pickets from offices of their employers to the dockside terminals where cranes load and unload containers massive oceangoing ships.

The truckers say the companies have prevented them from unionizing and improperly classified them as contractors — rather than full-time employees — to minimize wages and benefits. They say that their paychecks often amount to below minimum wage once the cost of renting and maintaining a truck is factored in, and have filed lawsuits and complaints with state and federal labor agencies to change their status. Companies counter that pay is good and those picketing do not represent the majority of drivers.

On Monday, 120 drivers went on strike against Green Fleet Systems, Total Transportation Services, Inc. and Pacific 9 Transportation, Inc., according to Barb Maynard, a spokeswoman for a campaign to organize truckers. The three trucking companies have approximately 400 trucks registered at the Port of Los Angeles — about 10 percent of those that operate on a regular day, port spokesman Phillip Sanfield said.

Both Sanfield and Ports of Long Beach spokesman Lee Peterson said cargo was moving normally, though several terminals were closed to honor a holiday that commemorates the killing of several dockworkers during the 1930s, when organizers succeeded in forming what has become a union with huge leverage at the West Coast’s 29 ports.

Members of the International Longshore and Warehouse Union are currently working without a contract — their six-year deal with the association representing shipping lines and West Coast port terminal operators expired July 1. There were no formal contract talks Monday and none expected for the next few days.

Both the union and the Pacific Maritime Association have said they do not want a disruption in the flow of goods.

That could be a challenge if truckers picket dockside terminals, as Maynard said would happen if trucks from the three companies make those runs.

During past trucker strikes, dockworkers stopped working in solidarity but quickly returned when an arbitrator ruled the job action was not permissible under their contract. With no contract in place, the arbitration process is not in effect. If dockworkers walk, their employers can’t force them back to work.

International Longshore and Warehouse Union spokesman Craig Merrilees would not speculate over what dockworkers might do if picketers set up outside marine terminals. A spokesman for the maritime association had no comment.