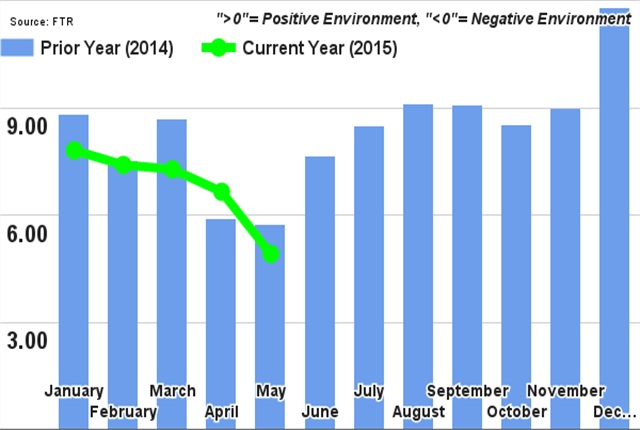 The FTR Trucking Conditions Index measure is down again in May, dropping to a three-year low of 4.91. The TCI was also lower than its mark a year ago in 2014. The drop is due to a number of different factors, such as fuel prices, overall pricing and lower capacity. FTR stated that May’s numbers are actually lower by 25 percent but not to worry. According to the research firm, the numbers are still in positive territory because overall conditions in the trucking industry remain good.

Trucking executives shouldn’t worry though, the FTR Trucking Conditions Index has a positive outlook heading toward the second half of the year. In fact, FTR predicts the Trucking Conditions Index will soon move up into significantly more positive territory as the anticipated regulatory drag in 2016 and 2017 dramatically tightens capacity. Tight capacity from the beginning of the year has slowed the index but has lightened up since the suspension of the latest Hours of Service changes.

Improvements in productivity and reductions in fuel prices have been responsible for keeping cost lower. But with the recession fully recovered, labor cost rising and fuel prices again heating up, we could see tension on rates as soon as the beginning of 2016. Even with the added turmoil, the outlook for the trucking industry as a whole looks positive.

“While the market has notably softened, conditions for fleets are still quite positive and indicate how well they are able to manage the current headwinds,” said Jonathan Starks,  FTR’s director of transportation analysis. “One significant benefit is that fuel costs have dropped substantially and have yet to significantly rise.

While diesel prices are still down from their highs in 2014, increased fuel prices could spell trouble for many carriers. Capacity levels are still a concern for many, despite the numbers easing over the last few months.

“While the capacity situation has definitely eased since last year, it is still well above historical levels and should keep contract rates, at minimum, stable with a potential to grow stronger by early 2016,” Starks added. “Overall, the market is stable, and we see that path continuing until we get into 2016, when recession and regulatory risks begin to rise significantly.”

Although freight has been growing, it has been at a slow steady pace. This has been a benefit to many carriers because it has allowed them time to make needed changes, combat the driver shortage and work around drivers’ hours.

The FTR Trucking Conditions Index tracks the changes representing five major conditions in the U.S. truck market: freight volumes, capacity utilization, fuel price, cost of capital, and fleet bankruptcies. The individual metrics are combined into a single index that tracks the market conditions that influence fleet behavior. Details of the May TCI are found in the July issue of FTR’s Trucking Update.